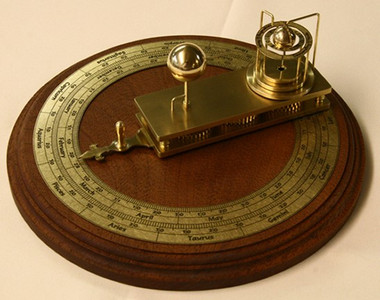 Presenting a new line of astronomical devices and mechanical curiosities commissioned by Sternreiter and made entirely in the U.S.A. by American craftsmen. This beautiful piece is the first collectible example. The solid brass mechanism sits proudly on a fine piece of solid Mahogany. Move the lever to the correct date and find the correct position of the earth on its axis, in relation to the sun and moon.

This orrery is unusual because it illustrates the movement of the nodes and apogee of the Moon's orbit, instead of the Moons position. The Moon's orbit is elliptical, with an eccentricity of about 5.49%. The difference in the perceived size of the Moon between the perigee (the closest approach to the Earth) and apogee (the farthest point from the Earth) is about 12%. People noticed the difference over the years because the Moon is about 30% brighter when closer to the Earth. The precession of the apogee around the Earth is just less than nine years. The pointer fixed to the large bottom plate represents the position of the apogee of the Moon's orbit.

The Earth's axis is inclined 23.5 degrees with respect to the ecliptic and remains fixed in that orientation with respect to the zodiac. The orrery illustrates this with a zodiac inscribed on the ring representing the plane of the ecliptic. The day/night indicator mounted to the frame facilitates conversations about the different lengths of days and nights throughout the year.

The calendar ring on the base illustrates both the conventional 365-day calendar and the western zodiac with 360 divisions. Ferguson's 1764 engraving shows the effect of Britain's adoption of the Gregorian calendar in 1752.

Ferguson's original model does not survive, but there is much information about it in Ferguson's writings.

A simplified version of the paradox reads: "Three wheels on the same axis mesh with one thick wheel. Turn the thick wheel. One of the thin wheels goes forward, one backwards, and one goes no way at all!"

What Ferguson was really doing with his Mechanical Paradox was emphasizing the importance of defining "rotation" with respect to a fixed frame of reference.

The paradox arises when in a train of gears - A, B, and C - gear A is fixed and gears B and C have epicyclic motion around it. Gear A is the gear under the sun and is fixed to the base. When all three gears have the same number of teeth, gear B rotates twice for each rotation and gear C maintains its orientation to a fixed frame of reference. That keeps the earths axis pointed in the same direction. When gear C has fewer teeth than gears A and B, it turns in the direction opposite the mechanism, in this case illustrating the regression of the nodes. When gear C has a few more teeth, it will slowly turn in the same direction as that of the mechanism, illustrating the advancement of the apogee of the Moons orbit.

James Ferguson (1710-1776) was the self-educated son of a Scottish crofter. At age seven he learned to read by listening to his father teach his elder brother to read the catechism. He developed an early aptitude for mechanics. The story is told of young Ferguson's fascination with mechanics being inspired by watching his father use a large lever to adjust the roofline of their house. By the age of ten, he was studying the stars while tending sheep and making models of spinning wheels and mills. He later built a wooden clock and a watch with whalebone springs. His education was enhanced by several servant positions with people who recognized his talents and contributed to his interests. One of his servant positions was with a neighbor who engaged him to clean clocks.

Moving to Edinburgh in 1734, Ferguson began to support himself as a limner (painting miniatures). He moved to Inverness, where he published his Astronomical Rotula for showing the motions of the planets, places of the sun and moon, etc. The (Rotula is similar to an ephemeris, but uses circular rotating volvelles.) He built his first orrery in 1742, and then made his final move to London in 1743. By 1748 Ferguson began to give lectures on scientific subjects, and his apparatus facilitated these lectures significantly. In 1763 Ferguson became a Fellow of the Royal Society of London. Ferguson's famous Select Mechanical Exercises, with a Short Account of the Life of the Author was published in 1773. Besides being one of the first popularisers of science, his influence extended considerably, with Thomas Paine and William Herschel reportedly studying his books. George III, while Prince of Wales, attended Ferguson's lectures and rewarded him with an annual pension of 50 pounds from the Privy Purse until his death in 1776. He designed orreries and a number of clocks. He knew Benjamin Franklin and apparently inspired Franklin to design his famous 3-wheeled clock, later designing his own versions.

This product hasn't received any reviews yet. Be the first to review this product!